Well, invasion is a little bit of an exaggeration but horses from the Czech Republic were very succesful at the Grand National meeting at rural Strömsholm, about ten miles north of Stockholm.

There were just six contenders in the Swedish Grand National, but all with a chance. Three from the Czech Republic, two from Sweden and one from Norway. None from Germany which produced the winner last year.

The victory went to the favourite Al Bustan (by Medecis), bred in Ireland but trained in the Czech Republic by Stanislav Popelka and ridden by Josef Bartos. Lady Dylan from Norway was second and Marcus Aurelius, also from the Czech Republic third.

There was Swedish consolation in the Swedish Champion Hurdle, as the 12 y o Swedish bred Calvados (By Trepolino) was the strongest at the run in. He is trained locally by Dennis Persson and had Niklas Lovén as pilot. Niklas has been National Hunt champion jockey many times.

Even the runner up was Swedish trained. That was Lindenthaler (by Azamour). Third place went to German guest Rosenköning.

As alwas there was sunshine (and som rain), picnics, and a beautiful greenery. 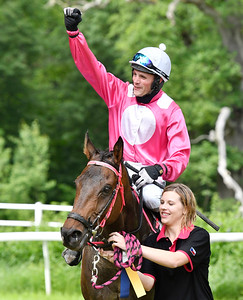 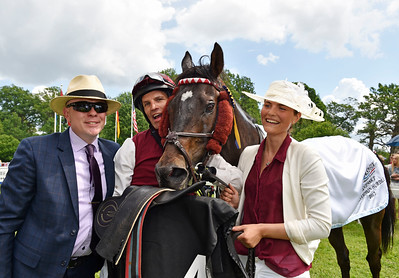